When it comes to waxing, microfiber towels or cotton terry cloth towels are the best choice. Microfiber is a better choice than terry cloth because of its greater ability to adsorb dried wax into the nap of the towel.

The deep nap of microfiber towels will capture hardened wax or sealant when buffing it off your paint surface. The nap acts as a protector to your paint by drawing any contaminants that may have been on the surface into the nap so that they will not scratch the paint as you buff.

Since nap is important to protecting your paint while buffing, we want to find towels with the thickest nap.

We found The Rag Company Microfiber Towels to be the best choice for buffing away wax for most people because use the highest quality microfiber in a microfiber towel and customers rave about the performance and durability. Not only that, but they’re relatively inexpensive.

The thicker the plush the more area for wax and grit to get trapped within. This makes for a much safer towel to use for removing wax.

The downside to the extra thick nap is that it makes it a little more difficult to “feel” how you are removing the wax as you are buffing it away.

Additionally, this towel is made from the finest quality microfiber – a 70/30 blend of polyester and polyamide Korean microfiber. 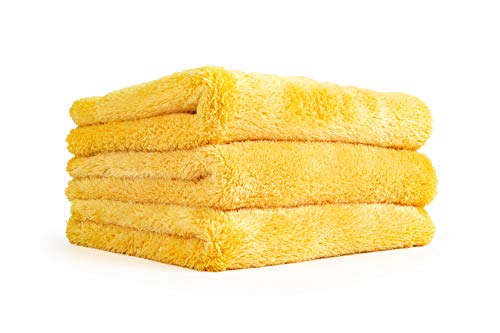 Make no mistake, while this towel is inexpensive in comparison to the others, it isn’t cheap. Money is saved by reducing the blend to 80/20 polyester/polyamide and not using the more premium sourced Korean microfiber.

The nap is much shorter but still provides very good protection. The trade off in nap gives you a much better feel. It allows you to better know how well you’re removing wax as you wipe. It’s a multipurpose design. A jack-of-all-trades design.

If you want to save a few bucks and also want to improve feel, this is your choice. 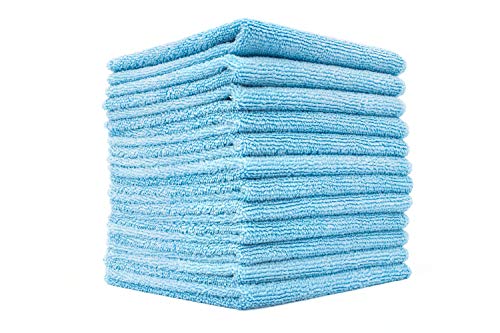 These microfiber towels are designed with removing wax in mind. They’re a quality 70/30 blend and have a longer pile on one side and a shorter pile on the other giving you varying levels of tactility.

This towel isn’t only good at wax removal but can be used for all sorts of tasks even though it is primarily designed for waxing. It also excels at polishing duties and glass as well.

There are no tags or sewn on edging that can potentially cause scratches.

If you want the very best towel for waxing a car, this is it. 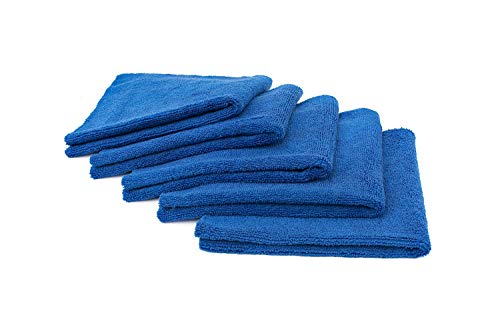 How does microfiber work?

Microfiber essentially works because the fibers are micro! Each strand of microfiber cloth can be 100 times thinner than a human hair. Why are very thin strands good? The thin strands are extremely good at trapping contaminants and adsorbing liquids. It is able to hold orders of magnitude more than a similar cotton towel or cloth. When it comes to automotive detailing, microfiber is best at protecting your vehicle from swirls and scratches because it traps more scratch causing contaminants deep within the fibers and holds it away from the surface of your paint.

Do you need to wash microfiber towels before use?

It is suggested by most manufacturers to wash your microfiber towels before first use. The reason is there could be loose fibers, lint, or debris that has accumulated during the manufacturing process or shipment. It is a reasonable step to take to ensure that your towels perform at their maximum potential. It is also good to ensure that any debris that could potentially scratch your clear coat be removed prior to use. You’re not likely to have problems if you decide to not wash your towels prior to their first use but it is possible. If you’re not in a rush you should give them a quick wash and dry to be safe.

What is the best way to wash microfiber towels?

Microfiber towels should be washed with fragrance free liquid detergent with cold water. Never use bleach or any other additives to your wash. You can wash them in a washing machine or by hand if you prefer. Do not wash microfiber towels with other laundry. Microfiber towels should be dried in the dryer on the lowest heat setting. Never use dryer sheets when drying your towels. Microfiber is very sensitive to heat because the ultra fine fibers have a low melting point and could easily be damaged. This is why you want to use cold water when washing and why you want to keep the dryer set to the lowest temperature.

The Ultimate Guide To Microfiber – The Art of Cleanliness

How To Use Microfiber Towels: A Practical Guide – Washos

Microfiber is the very best choice for waxing a car. Microfiber protects your clear coat from swirls and scratches better than anything else.

When it comes to finding the best microfiber towel to use for detailing you will never go wrong picking your choice from The Rag Company product line. The towel that ticks all of the boxes when it comes to waxing cars and trucks is the Edgeless 365. Its dual pile design gives you a little more flexibility when it comes to tactility. Dual pile means one side has a shorter nap than the other. Very handy.

If you want to save a few bucks you can go with the Terry Towel. It’s an inexpensive multipurpose detailing towel that can work very well for removing wax. It’s very capable for the job so don’t think it’s cheap. It’s just not the “best”.

The safest option is the Eagle. It has a extremely plush nap that will create a much larger area of microfiber strands to trap wax and anything that might potentially scratch your finish. The downside to the super plush pile is that it becomes more difficult to “feel” how well the wax is being removed. Depending on your personal preferences this may or may not be a big deal to you.

The best microfiber for removing wax depends on your preference. I prefer the Edgeless 365 for it’s dual nap and high tactility. The Rag Company makes very affordable microfiber that is also very high quality and smartly design. With such good quality and competitive pricing I can’t see any reason to look at any other microfiber company products.