How To Fix A Large Dent In A Car Door

How To Fix A Large Dent In A Car Door

Dents in car doors and other body panels can sometimes be fixed surprisingly easily. The tools to attempt to fix them are inexpensive and you’re not likely to make the problem worse by trying to fix the dent yourself.

Large dents look really bad but often they can be the easiest to fix. Even small dents often aren’t too hard to repair.

There are situations where the dent can be too difficult for you to handle on your own unless you’re really ready to dive into the job and have the skills to do the work on your own. These usually are when the metal is creased or the dent or ding is on a unique bend or curve in the metal.

Dents on smooth car panels are usually the easiest. A suction cup puller is often all that’s needed on simple large dents.

The challenge with smaller dings is getting enough pulling force in a concentrated area.

A powerful adhesive is used with paintless dent removal kits for smaller dings. These adhesives won’t damage the paint and can easily be removed when the dent has been pulled out. 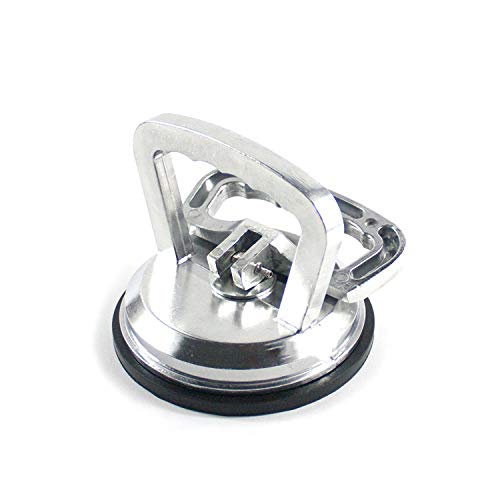 Often a simple suction cup can pull out large dents on smooth surfaces. 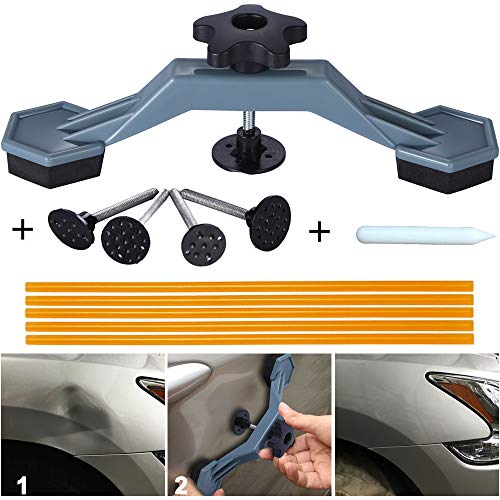 For some dents you need a little adhesive to properly pull the dent. 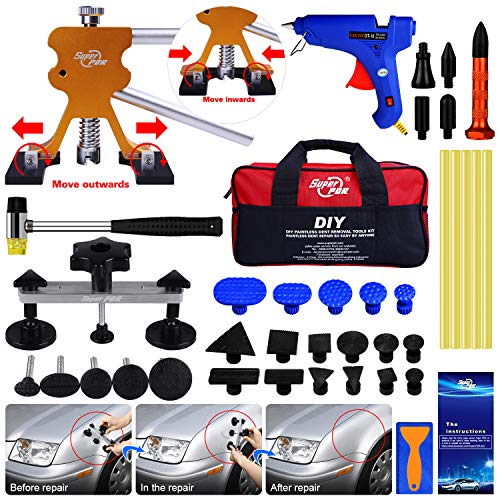 If you have multiple more challenging dents to pull you need a more adaptable kit.

Often a simple suction cup can pull out large dents on smooth surfaces.

For some dents you need a little adhesive to properly pull the dent.

If you have multiple more challenging dents to pull you need a more adaptable kit.

Suction cup dent pullers are ideal for simple large dents on relatively flat and smooth panels. They are simple to use and they typically work very well on these problem areas.

To use you just stick the suction cup puller in the center of the dent. If you can identify the exact spot that the panel was hit, that would be the best spot to attach the suction cup.

You’ll want to clean the spot that you’re applying the puller to thoroughly before trying to stick it to the car. You want to remove any abrasives that may be on the surface where the puller where be placed so that you don’t scratch your paint.

These pullers usually have handles that you pull together to create a strong suction on the panel. Once the puller is firmly stuck to the panel you should be able to pull forcefully to begin pulling out the dent. You may need to repeat the process several times to get the dent completely pulled out.

On more complex larger dents you may have trouble with some spots where the bodywork isn’t terribly flat. You may need to move the puller to a different location to get the dent better resolved.

Sometimes a simple suction cup dent puller can’t get the job completely done on its own.

When a simple suction cup dent puller can’t get the job done, a good adhesive dent puller may be what you need to step up to.

A tool is applied to the rod and the dent or ding is slowly pulled out. This is a more precise and controlled way of pulling a dent than a suction cup.

This kit may not be the best at pulling particularly large dents however. A suction cup puller would be better suited for those.

This kit would be good to use in addition to a suction cup puller on more challenging dents. If you find that you have a small bend or dent left after fixing the large dent, this tool could help fine tune the result.

This kit may not work very well on very small dings but should work well on a wide variety of sizes of dent. It will likely only have trouble with the largest and smallest dents or those that are more complex.

If a dent has deformed over mechanicals behind it for instance you shouldn’t expect terribly good results.

It will also be much better suited for pulling out the impact spot of a much larger dent that the suction cup puller wouldn’t be able to resolve on its own.

While this kit is quite a bit more expensive than the simple adhesive bridge, it still is quite cheap and does an amazing job handling all sorts of dents and dings.

If the cost of this kit doesn’t turn you off it is an excellent tool set that you can keep on hand to deal with potential future dents and dings that you or friends may have.

If you have an air compressor available you may want to consider a pneumatic dent puller with a slide hammer.  This tool is a serious upgrade to the simple suction cup dent puller. It will stick much better than a suction cup could ever hope to stick. Plus the built in slide hammer is designed specifically to help pull out difficult dents.

The additional sucking force that is created can help with spots that the simple suction cup may have trouble maintaining a good seal on. This tool is limited to dealing with fixing large dents only.

If you find you have a ding at the impact point or the dent has some complex spots that require a more finely controlled tool to address you’re going to want to add either the simple adhesive bridge or advanced paintless dent removal kit.

The soft rubber suction cup will protect your paint surface from scratches but you will still need to thoroughly clean the area prior to usage.

If your budget can allow it and you can foresee the possibility of using this tool in the future, it could be a really good buy.

Even if you use it effectively only once it will pay for itself. 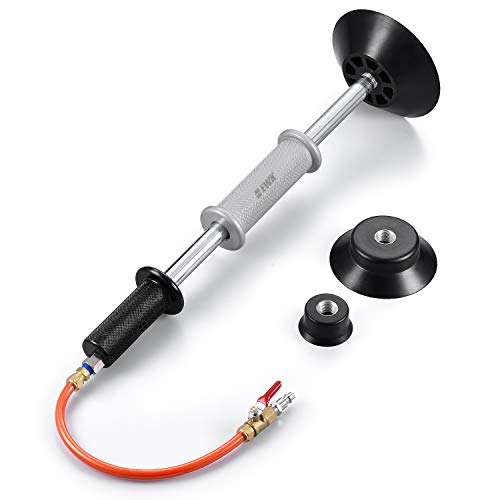 If you’re feeling particularly bold you may want to consider a paint removal tool set. This dent removal rod set is designed to be inserted behind a body panel and push a dent back out.

These are professional grade tools used by paintless dent removal companies. They require both finesse and the ability to access the panel from the backside.

These tools are best suited for the devoted and patient unless you have some previous experience using them. They will however allow you to tackle almost any dent or ding.

That said, most inexperienced people will be far better at using something like an advanced paintless dent removal kit that uses adhesives to pull out dents. 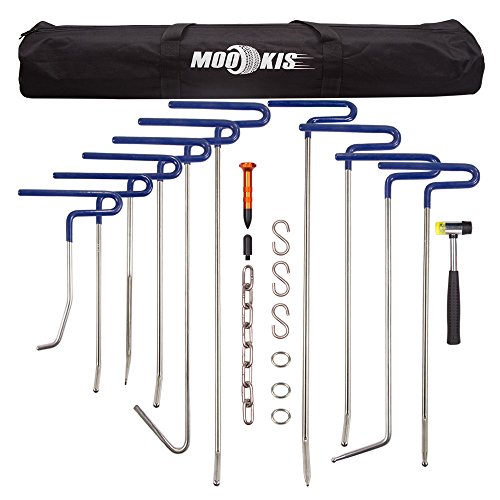 So many people drive around with dents in their car that they assume will cost too much money to fix so they don’t bother.

While all dents can’t necessarily be easily fixed without having to repaint your car or truck, a surprisingly large amount of them can be easily fixed if you have the right tool for the job.

Large dents are often the easiest to fix. They frequently haven’t damaged the paint and can usually be pulled back out quickly and leave no trace that there ever was a dent.

Even smaller dents like gravel or hail dings can surprisingly be easily removed with the right tool for the job.

Situations that are more difficult to resolve are dents on creases or seams of the body work. Also, some dents will create creases which are hard to resolve easily.

If you have some simple dents it would behoove you to explore some of these DIY dent removal tools. They’re very inexpensive when compared to what it costs to have dents and dings professionally removed. If you’re going to be buying detailing products anyway, why not save 10%.

Visit our partner Detailed Image and use our Coupon Code to save Today!